Alfred Henry Ackley was born 21 January 1887 in Spring Hill, Pennsylvania. He was the youngest son of Stanley Frank Ackley and the younger brother of B. D. Ackley. His father taught him music and he also studied at the Royal Academy of Music in London. He graduated from Westminster Theological Seminary in Maryland and was ordained as a Presbyterian minister in 1914. He served churches in Pennsylvania and California. He also worked with the Billy Sunday and Homer Rodeheaver evangelist team and for Homer Rodeheaver’s publishing company. He wrote around 1500 hymns. He died 3 July 1960 in Los Angeles. 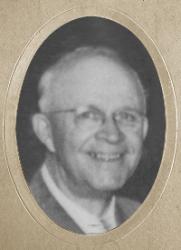 1. I Serve A Risen Savior

2. I Serve A Risen Savior